We’ve lost a legend in physics. If you haven’t heard of Freeman Dyson by name, you may have heard of one of the many, many things named after him, most notably the Dyson Sphere, a hypothetical alien megastructure that should be detectable from Earth.

In brief (if the life of an extremely accomplished 96-year-old can ever be summed up briefly), he worked on Project Orion, a nuclear powered spaceship that was eventually abandoned. He helped Julian Schwinger and Richard Feynman win the 1965 Nobel Prize in Physics for discoveries in quantum electrodynamics. He researched, wrote about, and often successfully predicted discoveries made in the areas of astrobiology, biological engineering, and space exploration using robotics. He was the 2000 recipient of the Templeton Prize.

Book lovers might enjoy his 2015 interview in the New York Times book section. I was priviledged to attend a talk with the physicist in 2018, when he was 94-years-old. You, too, can stream the audio or video of this talk from the New York Public Library website. He was promoting his latest book, Maker of Patterns. A prolific author, here are some of his notable books:

Maker of Patterns: An Autobiography Through Letters (2008) 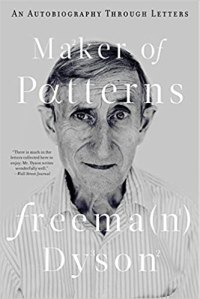 Having penned hundreds of letters to his family over four decades, Freeman Dyson has framed them with the reflections made by a man in his nineties. While maintaining that “the letters record the daily life of an ordinary scientist doing ordinary work,” Dyson nonetheless has worked with many of the twentieth century’s most renowned physicists, mathematicians, and intellectuals, so that Maker of Patterns presents not only his personal story but chronicles through firsthand accounts an exciting era of twentieth-century science.

Find Make of Patterns at your local bookstore website.

Spanning the years from World War II, when he was a civilian statistician in the operations research section of the Royal Air Force Bomber Command, through his studies with Hans Bethe at Cornell University, his early friendship with Richard Feynman, and his postgraduate work with J. Robert Oppenheimer, Freeman Dyson has composed an autobiography unlike any other. Dyson evocatively conveys the thrill of a deep engagement with the world-be it as scientist, citizen, student, or parent. Detailing a unique career not limited to his groundbreaking work in physics, Dyson discusses his interest in minimizing loss of life in war, in disarmament, and even in thought experiments on the expansion of our frontiers into the galaxies.

Find Disturbing the Universe at your local bookstore website. 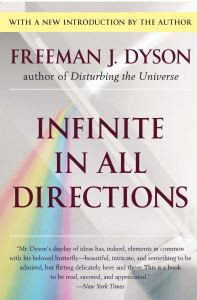 Infinite in All Directions is a popularized science at its best. In Dyson’s view, science and religion are two windows through which we can look out at the world around us. The book is a revised version of a series of the Gifford Lectures under the title “In Praise of Diversity” given at Aberdeen, Scotland. They allowed Dyson the license to express everything in the universe, which he divided into two parts in polished prose: focusing on the diversity of the natural world as the first, and the diversity of human reactions as the second half.

Find Infinite in All Directions at your local bookstore website.

One hundred years after H. G. Wells visited the future in The Time Machine, Freeman Dyson marshals his uncommon gifts as a scientist and storyteller to take us once more to that ever-closer, ever-receding time to come. Since Disturbing the Universe, the book that first brought him international renown, Freeman Dyson has been helping us see ourselves and our world from a scientist’s point of view. In Imagined Worlds he brings this perspective to a speculative future to show us where science and technology, real and imagined, may be taking us.

In The Scientist as Rebel, Freeman Dyson tells stories of scientists at work, ranging from Isaac Newton’s absorption in physics, alchemy, theology, and politics, to Ernest Rutherford’s discovery of the structure of the atom, to Albert Einstein’s stubborn hostility to the idea of black holes. He looks with a skeptical eye at fashionable scientific fads and fantasies, and speculates on the future of climate prediction, genetic engineering, the colonization of space, and the possibility that paranormal phenomena may exist yet not be scientifically verifiable.

Find The Scientist as Rebel at your local bookstore website.