The Evolving Animal Orchestra: In Search of What Makes Us Musical by Henkjan Honing

In The Evolving Animal Orchestra, Henkjan Honing embarks upon a quest to discover if humans share the trait of musicality with other animals. Honing tests a rhesus monkey for beat perception via an EEG; performs a listening experiment with zebra finches; considers why birds sing, and if they intend their songs to be musical; explains why many animals have perfect pitch; and watches marine mammals respond to sounds. He reports on the unforeseen twists and turns, doubts, and oversights that are a part of any scientific research―and which point to as many questions as answers. But, as he shows us, science is closing in on the biological and evolutionary source of our musicality. (March 5)

Supernavigators: The Astounding New Science of How Animals Find Their Way by David Barrie

Weaving interviews with leading experts on animal behavior with the groundbreaking discoveries of Nobel Prize–winning neuroscientists,  award-winning author David Barrie takes us on a tour of the cutting-edge science of animal navigation, where scientists are unraveling how creatures as various as butterflies, birds, crustaceans, fish, reptiles, and even people find their way. Supernatvigators is a globetrotting voyage of discovery celebrating the navigational gifts of animals; from whales and lobsters to birds and beetles—and many more. (May 28)

New York Times best-selling author and primatologist Frans de Waal explores the fascinating world of animal and human emotions. Mama’s Last Hug begins with the death of Mama, a chimpanzee matriarch who formed a deep bond with biologist Jan van Hooff. When Mama was dying, van Hooff took the unusual step of visiting her in her night cage for a last hug. Their goodbyes were filmed and went viral. Millions of people were deeply moved by the way Mama embraced the professor, welcoming him with a big smile while reassuring him by patting his neck, in a gesture often considered typically human but that is in fact common to all primates. (March 12)

Adventures in Cryptozoology: Hunting for Yetis, Mongolian Deathworms and Other Not-So-Mythical Monsters by Richard Freeman 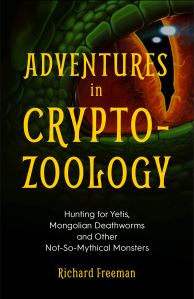 Cryptozoology, the study of hidden, monstrous, and legendary animals, is truly the art of discovering the unknown. Richard Freeman, Zoological Director of Centre for Fortean Zoology, has explored the corners of the five continents on the search for creatures that many people believe are non-existent. In this book, he shares the exciting stories of his investigations of the Yeti, Mongolian Deathworm, Loch Ness Monster, Orang-Pendak, Ninki-Naka, and more. (May 15)