Skeleton Keys: The Secret Life of Bone by Brian Switek 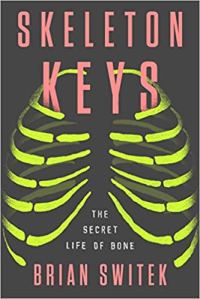 In this natural and cultural history of bone, Scientific American blogger Brian Switek explains where our skeletons came from, what they do inside us, and what others can learn about us when these wondrous assemblies of mineral and protein are all we’ve left behind.  Bridging the worlds of paleontology, anthropology, medicine, and forensics, Skeleton Keys illuminates the complex life of bones inside our bodies and out. (March 5)

“A cheerful popular-science romp through the matter that makes up our skeleton.” —Kirkus Reviews

Ten Drugs: How Plants, Powders, and Pills Have Shaped the History of Medicine by Thomas Hager

Beginning with opium, journalism and communications professor Thomas Hager tells the century-spanning history that traces the evolution of our culture and the practice of medicine. His subjects include the largely forgotten female pioneer who introduced smallpox inoculation to Britain, the infamous knockout drops, the first antibiotic, which saved countless lives, the first antipsychotic, which helped empty public mental hospitals, Viagra, statins, and the new frontier of monoclonal antibodies.
(March 5)

An Elegant Defense: The Extraordinary New Science of the Immune System: A Tale in Four Lives by Matt Richtel

Magnificently reported and soulfully crafted, An Elegant Defense is an epic, first-of-its-kind exploration of the human immune system and the secrets of health, by Pulitzer Prize–winning New York Times journalist Matt Richtel. He effortlessly guides readers on a scientific detective tale winding from the Black Plague to twentieth-century breakthroughs in vaccination and antibiotics, to the cutting-edge laboratories that are revolutionizing immunology—perhaps the most extraordinary and consequential medical story of our time. (March 12)

The Secret Wisdom of Nature: Trees, Animals, and the Extraordinary Balance of All Living Things ― Stories from Science and Observation by Peter Wohlleben

In this tour of an almost unfathomable world, Wohlleben describes the fascinating interplay between animals and plants and answers such questions as: How do they influence each other? Do lifeforms communicate across species boundaries? And what happens when this finely tuned system gets out of sync? By introducing us to the latest scientific discoveries and recounting his own insights from decades of observing nature, one of the world’s most famous foresters shows us how to recapture our sense of awe so we can see the world around us with completely new eyes. This is the final book in The Mysteries of Nature trilogy that includes The Hidden Life of Trees and The Inner Life of Animals. (March 5)

0 comments on “Most Anticipated March Reads”