Einstein’s Monsters: The Life and Times of Black Holes by Chris Impey 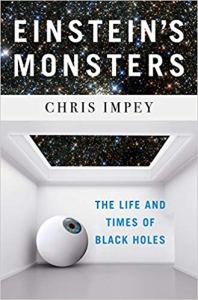 Distinguished astronomer Chris Impey takes readers on an exploration of questions at the cutting edge of astrophysics, as well as the history of black holes’ role in theoretical physics―from confirming Einstein’s equations for general relativity to testing string theory. From the small questions to the big ones―from the tiniest particles to the nature of space-time itself―black holes might be the key to a deeper understanding of the cosmos. (November 13)

Out There: A Scientific Guide to Alien Life, Antimatter, and Human Space Travel by Michael Wall

In Out There, Space.com senior writer Dr. Michael Wall covers questions far beyond alien life, venturing into astronomy, physics, and the practical realities of what long-term life might be like for we mere humans in outer space, such as the idea of lunar colonies, and even economic implications.  The book is arranged in a simple question-and-answer format. The answers are delivered in Dr. Wall’s informal but informative style, which mixes in a healthy dose of humor and pop culture. (November 13)

Your Place in the Universe: Understanding Our Big, Messy Existence by Paul M. Sutter

An astrophysicist presents an in-depth yet accessible tour of the universe for lay readers, while conveying the excitement of astronomy. Through metaphors and uncomplicated language, Sutter breathes life into the science of astrophysics, unveiling how particles, forces, and fields interplay to create the greatest of cosmic dramas. Touched with the author’s characteristic breezy, conversational style he conveys the fun and wonder of delving deeply into the physical processes of the natural universe. (November 20)

In this fully up-to-date and beautifully illustrated account, William Sheehan describes the growth of our knowledge of planet Mercury.  From the puzzles it posed for early astronomers to radar studies in the 1960s, and from the first spacecraft fly-bys by the Mariner 10 probe in the 1970s to the latest images from the Mercury Surface, Space Environment, Geochemistry, and Ranging (MESSENGER) orbital mission between 2011 and 2015, Mercury has slowly been brought into clear focus. (November 15)

Five Photons: Remarkable Journeys of Light Across Space and Time by James Geach

In Five Photons, astrophysicist James Geach serves as our guide on this cosmic voyage.  Geach explains five tales of fascinating astrophysical processes that propel light across space and time, tales of quantum physics and general relativity, stars and black holes, dark matter and dark energy. Sweeping us away on electromagnetic waves, Five Photons is a journey of discovery toward a deeper, more enlightened understanding of this breathtaking universe. (November 15)

The Race to the Moon Chronicled in Stamps, Postcards, and Postmarks: A Story of Puffery vs. the Pragmatic by Umberto Cavallaro

Through this fascinating historical visual record, Cavallaro shows the differences between the US and the USSR’s tactics during the race to the Moon, all told through images on postage stamps, postcards, and letters in circulation at that time. (November 4)

0 comments on “6 Outer Space Books to Read This November”